What the Wildlife / Animal Committee is looking for in 2020.

What the Wildlife / Animal Committee is looking for in 2020.

One of the greatest traits of photography is its ability to bring unique and seldom seen worlds into the public consciousness. In this way, communicating an experience to a mass audience can be an act of preservation. If we can preserve a moment, then we can preserve history.

So is true for wildlife and animal photography. As a genre, it has existed for almost as long as photography itself. Whilst we have always felt it important to document our surroundings, a particular drive has forever been present in some artists to specifically record the worlds, ecosystems and internal complexities of life beyond our regular human gaze.

At times, practitioners of this craft can share more in common with scientists than they do with many of their artistic peers. Throughout history, no other form of art has so valuably captured forms of life on the brink of extinction and as such, one might refer not only to all photographers as historians, but also to those who capture the natural world as conservationists. As with many photographs, not all artists pre-anticipate their impact. I have recently learned that Conservation Photography is considered a sub-genre within the photographic world of wildlife and animal photography. I must admit that this isn’t my usual field of expertise, though as an artist, an environmentalist and somebody who spends most of their creative life documenting the landscape, I have to wonder if not all images of at-risk species are acts of conservation.

When the Koala population of NSW has declined by over 60% in the last 20 years, at what point does a picture of a Koala in NSW become politicised? I can ask the same questions of the Great Barrier Reef and the extreme biodiversity found amongst it’s coral. At what point does a picture of a thriving reef become a conservation tool? I would argue that it becomes a tool of conservation the moment it is consumed by an audience, for who could sanction the destruction of such a mystical place when confronted with the magic of its existence?

I’m not attempting to assert that all pictures of living things must be motivated by conservation efforts or that a beautiful picture cannot just be a beautiful picture. There does always come a turning point though and no art is made in a vacuum. 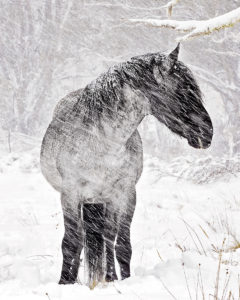 This image of a Snowy Mountains Brumby by Carol Hancock placed second in the 2018 APA Wildlife / Animal Category. Carol has made a life’s work of photographing Brumby’s in her home state of NSW and campaigning for their freedom to exist. Traditional conservationists would disagree, citing generally accepted environmental studies showing that the Brumby’s are in fact a serious risk to the biodiversity and native ecology of the Snowy Mountains region. Regardless, Carol’s imagery of wild horses running through the vast plains of Kosciuszko National Park certainly provokes conversation around what exactly is conservation – what should be conserved and why?

Involving any amount of technical proficiency using enormous telephoto lenses wielded with patience, 5:1 macro lenses battling depth of field and motion triggered covert equipment, the pursuit of capturing the behaviour of many animal species would have been virtually impossible only 50 years ago. A great wildlife or animal image though, combines all of this technical skill with that extra flavour of concept as we discussed previously. Not only the how, but the why, is what makes an image really stand out above the rest. To photograph the true essence of an animal takes great knowledge of its existence, alongside great skill involved in its capture.

We would like to introduce our Wildlife / Animal Committee Members for 2020 and tell you a little bit about their work and qualifications for the role.

James Dorey is a photographer and PhD candidate working in the fields of extreme macro and technical photography. His work is aided by scientific training, focussing on bringing rarely-seen species to the public through his photography and research. Having a Bachelors in Ecology and Zoology from the University of Queensland and currently completing his Ph.D at Flinders University in Adelaide in which he is looking at the evolution, taxonomy and ecology of Australian and Fijian native bees, James is certainly qualified to consider imagery of the natural world.

Similarly impressive is James’ photographic record, his work having graced the covers of such publications as Australian Geographic and having been recognised by many awards programs. James uses modern techniques though follows in the footsteps of many photographers who have come before him. His personal relationship between James the artist and James the scientist is key to his process, fulfilling the two roles to produce imagery which illuminates animal life both big and small.

Georgina Steytler is a nature photographer primarily interested in birdlife. Passionate about conservation, Georgina has been working for over 10 years to not only photograph but also teach the practice of photographing birds all across Australia through workshops, artist talks and writing.

Her work continues to highlight the behaviour, ethics and conservation requirements of the natural world while teaching these concepts to up and coming photographers Australia wide.

Matt Palmer is a photographer, educator and community organiser. Amongst an incredibly long list of awards and recognitions, he was recently named the 2019 Australian Professional Photographer of the Year. His extensive history in community and awards programs such as the Mono Awards, Head On, AIPP and our own APA is still yet overshadowed by his productivity and proficiency as a photographer of the environment.

Whilst Matt has lived all across Australia, he has most recently been living in Tasmania for the purpose of being closer to nature and dedicating himself to creating work around the island state’s natural spaces.